On the morning of June 14, 1968, a group of hippies fled to the mountains of Colorado to wait for doomsday, as the meteor, Icarus, neared Earth. Prophet Don, the leader of the doomsday cult, reported that after the meteor stuck the planet, California would slide into the ocean, the land would be plagued with horrible earthquakes, and society as we knew it would collapse. Don was correct.

You are a Survivor, one of a handful of children born from The Children of the Flowers, living in the mountainside town of Eldorado Springs, Colorado. Since Icarus's landing, the planet has seen wars, massive earthquakes, and the atmosphere poison itself. Not in Eldorado Springs though, it's safe here, it's always been safe here. Things are said to live out in The Periphery, the space around the town that none of these problems seem to cross over into, but it's fine here. It's always fine here. Rumor is the atmosphere is starting to clear up, but the people who leave into The Periphery don't always come back. What are you going to do about it?

Phanta is a rules-lite and easy to work with RPG system, designed for fast decisive actions, and lasting relationships, both with the other Survivors you find yourself with, and the other folks in Eldorado Springs. All you need to play is 2-6 players, a copy of the rules, your Survivor's playbook, and a handful of d6s.

The Playbooks and Pop Culture Quick Reference guide are both marked as Demos just so players can more easily download them without needing to purchase the full game, but don't contain significant game text within them.

Phanta now officially supports Role, and I have a basic character sheet up there if you'd like to use it.

Phanta was made as part of the Record Collection 2k21 Jam and is based on the song Phanta by Le Tigre (off their incredible 1999 debut  self titled album).

If you'd like a review copy of this game, shoot me a message on twitter (@Keganexe) or email me at Phanta@keganexe.com.

Print copies are here! You can reach me either of the above ways to get one, or purchase through itch (which is a little clunky but we will make it work!)

I made a new game, Star Heist, that uses a heavily modded version of the Phanta rulest to run! If you're interested you can get it here, you can play Phanta inside of an Adam Bell game, Stat Heist here.

In order to download this game you must purchase it at or above the minimum price of $5 USD. You will get access to the following files:

Support this game at or above a special price point to receive something exclusive.

If for any reason you can't afford a copy of the game, help yourself to a community copy of Phanta, no questions asked, covered by your fellow gamers :)

Create a community copy one of two ways!

Phanta is an RPG inspired by Le Tigre's song. Decades ago, the world was nearly destroyed, and those remained fought a bloody civil war. You are survivors in the post-apocalyptic landscape, facing dangers beyond the last bastion of humanity.

Alright, putting on Phanta by Le Tigre as I read through this. Seems necessary!

First off we get a short explanation of the setting of the game, what you need to play, and what kind of characters you'll be making. One of the hooks that grabbed me right away was the name of the group you'll be part of as a character: The Children of the Flowers. I like this immediate sort of contrast to the post-apocalyptic tone!

After that we get to the meat of the mechanics of the game: it's 2d6 added together to land on a band of results (from failure with major consequences to success with a boon.) One thing that immediately caught my eye as something I LOVE is that certain results actually give you a choice: with 6-8 you can choose "Success with a Minor Consequence, or Failure." Putting that choice in is a really good move—sometimes, I don't want the often lauded "success with a cost" result. Giving a choice between that and failure is just... more fun.

"Success with a boon" isn't just a critical success on the check, it's spelled out that it is a semi-permanent boost that a character receives, that will help them in some way down the line. I really enjoy this distinction since it makes those rolls where you get a 12 feel much more impactful and rooted in the world.

I'm a pretty big fan of skills in RPGs, so it's nice to see them here. There's a list of 10 and they're pretty representative to what kinds of things I imagine characters doing in a post-apocalyptic setting. No bonuses to the roll, instead we're just rolling 3d6 and taking the highest 2.

Minor Injuries are tied to skills which I really love! Combat itself seems like a quick and loose affair, leaving a lot of room for narrative positioning and cinematic moments.

Building a survivor seems pretty quick—choose one of the 5 playbooks and start filling it out. There's a levelling system here, which I also enjoy. During character creation, you're also tying your character to at least 1 other person living in Eldorado Springs, which is great. Knowing the group I regularly play with, this part of the game would probably result in us creating 10-15 NPCs with complex relationships, which I think works awesome for this.

The playbooks are downloadable for everyone on itch. Each one is specialized for a different task, and they all have specific advances for levelling up. Players creating their own advances seems like such an easy and fun thing to do I was really glad to see that called out directly in the book. I enjoy the approach to characters in this game; they're not powerhouses of a million different moves and abilities to learn, but they don't feel restricted or locked down like structured "Moves."

Along with much appreciated safety tools, that's the mechanics, and now we're moving on to the lore of the world!

The background of Phanta is precise and evocative, and the characters belonging to a hippie-founded (prophetically-correct) doomsday cult is a fresh change in the milieu!  The set-up gives us several solid and interesting hooks for starting a game, and a second faction nearby that has settled into a long-standing truce. (Immediately, I imagine the delightful potential to tie some of The Children to The Residents for story-hooks and roleplay.) My only critique here is the desire to see more named NPCs like Faith Leilani presented with their own story hooks, but the NPC creation that's part of building a character helps alleviate that.

We get to the section of the game for the GM, and are immediately presented with a good list of example names to come up with more NPCs from both factions. The advice for running the game is great and applicable for anyone, especially the parts about collaborative worldbuilding. We then get an example list of enemy stats which are simple and easy to create on the fly (one of my highest prized things I look for in an RPG) and then an absolutely awesome list of boons to offer the players on a roll of 12. These are permanent additions to a character that make them stand out! Equipment is likewise simple and easy to make, and there's an undercurrent implied here that you should mess around and just try making some stuff on your own and not worry to hard about breaking the system.  I dig it.

Overall, I think Phanta is a great game with a very solid mechanical base that encourages hacking and modification. The world is fun and interesting with some great twists that set this apart from just another mad-max like post-apocalyptic game (though it could easily handle that, too.)

Thank you so much for this! This review really made my day!

Of course. Phanta is a really neat game and I hope to see to more of it and/or other games that use the ruleset (Star Heist is great too BTW!)

I could not have picked a better song to base a game on! 5 stars. 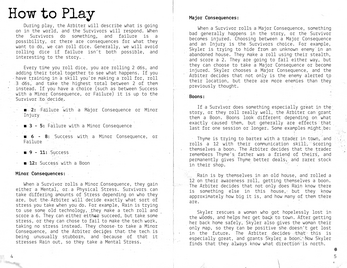 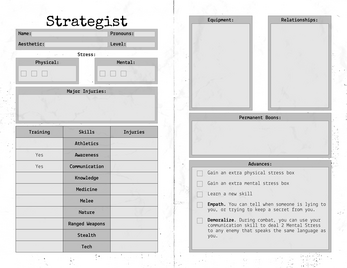 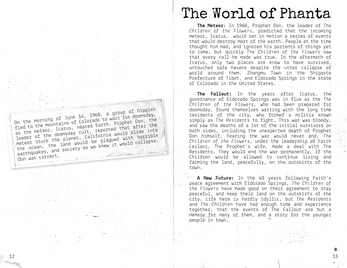 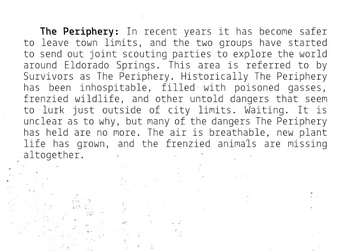 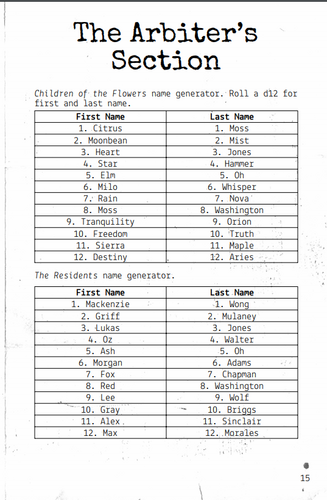 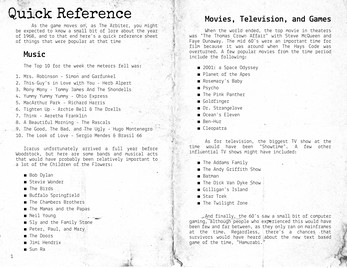 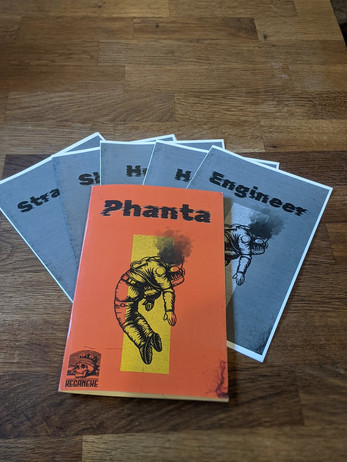