Fragmented: is a two player RPG, designed to be played both over a series of days, and over Google Docs. The two of you will design an AI, and take turns telling the oft conflicting story of how your current situation came to be. You share a mind, but your memories don't match, and something has happened to you, but you can't remember what. You'll undergo defragmentation, and try to pull yourself back together, and hope beyond hopes that you're alright.

At its heart Fragmented: is a story about coming to terms with trauma. Your memory is broken, and everything hurts, but you have to probe those places deep inside of you because it’s important to know what happened. The only way forward is backward, but are you brave enough to go there?

In the file list you'll see Fragmented as well as Fragmented Reloaded, and while there are some minor differences to note, they are super minor.  Fragmented Reloaded is my work to massively update the game and make it look cooler and more distressed overall, it contains a few minor text updates in the first half, but the second half of the manual is untouched outside of some updated to the page backgrounds and whatnot. The biggest updates are all stylistic, and Reloaded is a significantly larger file!

In order to download this game you must purchase it at or above the minimum price of $10 USD. You will get access to the following files:

Support this game at or above a special price point to receive something exclusive.

If for any reason you can't afford a copy of the game, help yourself to a community copy of Fragmented: each sale contributes an additional copy to the pool.

Hi! My friend and I are playing this game and are really enjoying it so far. We love the idea of using the Tarot as a way of randomizing the prompts.

We're both curious though, about the 23rd Higher Arcana (The Well)? We've never heard of it before and we're unable to find it online. Is it part of a particular edition of Tarot cards?

I had a deck that had the well, and I wrote the entire game before remembering that it just had that as an extra card in it for some reason??? Ended up keeping the card in on the off chance someone else was using the exact same deck, but I keep meaning to go back in and put a note that is an unusual card most decks don't have haha 😅 It's from the Ethereal Visions Illuminated Tarot deck though! Beautiful deck, super shiny.

Sorry about the confusion there, but super glad you're enjoying the game! Always lovely to hear things are actually getting played! 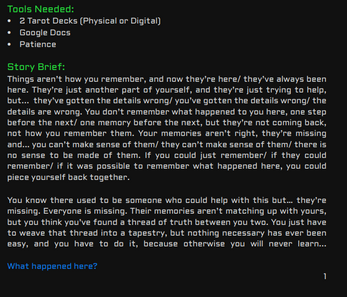 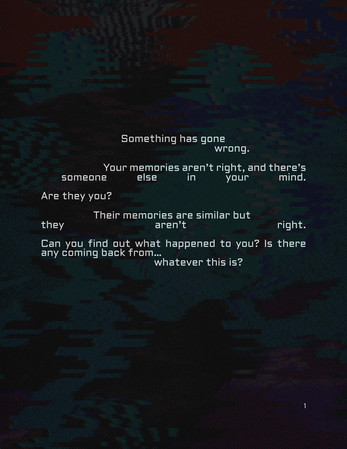